Yet Another Big Cat Facing An Uncertain Future

The least studied of the big cat family, the leopard is considered to be the most adaptable of the big cats; however even this adaptability has not been able to prevent the effects of losing 75% of its range worldwide, resulting in it being downgraded on the IUCN Red List from near threatened to vulnerable. This means that of all the big cats, the jaguar is the only species not considered to be threatened with extinction. 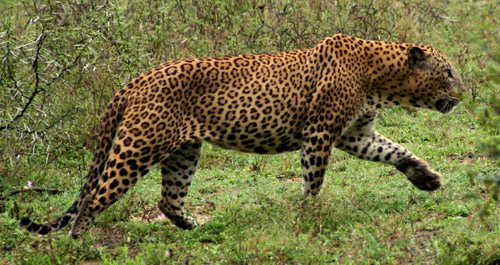 Although the whole species is not considered endangered, there is one subspecies which is at real risk: the Indochinese leopard. A recent study published in Biological Conservation by Rostro-Garcia et al, states that there are no more than 2,500 members of this subspecies left, potentially even as few as 1,000 individuals. The Indochinese leopard has been eradicated from 93% of its habitat by a combination of poachers’ snares, deforestation and a decline in its prey. Once found throughout Southeast Asia, this subspecies is now extinct in Singapore and more than likely in Laos and Vietnam too. Other small populations in China are also not expected to survive for long.

Only two remaining strongholds exist in peninsular Malaysia and the Northern Tenasserim Forest Complex located on the border of Thailand and Myanmar; with a third unique sub-population in Cambodia. The leopards here have adapted to tackle bigger prey, which is surprising considering the availability of smaller prey in the area.They are also unique in the fact that they are the last population of solely spotted leopards; the majority of the other populations being melanistic leopards (black coats).

Epidemic levels of snaring has devastated wildlife populations in the forests of Southeast Asia, be it for food, traditional medicine or the pet trade. Leopard parts are often used as substitutes for tiger parts because leopards are more numerous than tigers and as tiger numbers decrease, the price and demand from Vietnam and China for parts increases, driving high poaching levels. Alongside this, the over-hunting of prey species has meant that it is harder for leopard populations to recover because there is less prey for them to hunt.

It isn’t only poaching that is a major danger. Human development has caused epic scales of deforestation with Malaysia and Cambodia among the nations with the highest deforestation rates in the world. The Northern Tenasserim Forest Complex population of leopards may have their habitat fragmented further by a proposal to build a road through the middle of the area on both sides of the border. Not only would this fragment habitat, it would also cause an increase in poaching as the forest would be made more accessible to humans.

In order to prevent the loss of this subspecies, numerous conservation measures need to be taken. First and foremost, people need to be made aware of the plight of this species. Leopards are the least studied of the big cats, which may have meant that we have neglected to see their plight. Rather than classifying them broadly, the IUCN Red List should assess each subspecies separately and list them accordingly, so that populations in danger are noticed in time for conservationists to take action. In the case of the Indochinese leopard, wildlife trade laws need to be toughened and the governments of range countries need to have efficient law enforcement coupled with campaigns to raise awareness and reduce demand for animal parts. This would not only aid the conservation of the leopard, but also of the main prey species that have been ruthlessly over-hunted. Of course, none of this is possible without an appropriate level of funding, which unfortunately Myanmar does not receive. There needs to be more worldwide investment in conservation if endangered species are going to survive.