There are not many animals on the planet that are surrounded by so much controversy as wolves. This has been wolf awareness week, a week dedicated (as the name suggests) to raising awareness and dispelling some myths about the ‘the big bad’ wolf.

As children we are read stories about magical kingdoms, far off lands and exciting adventures, when reading these stories something seems to come up consistently, the big bad wolf. Depicted as villains often terrorising villages and harassing children dressed as an old lady, wolves are portrayed as being the worst of the worst. Nasty, conniving and always out to eat and injure  people, or potentially worse, turn you into a half man, half beast werewolf. Wolves are never shown in a positive light. In reality however wolves are very different to the ones you read about in books. 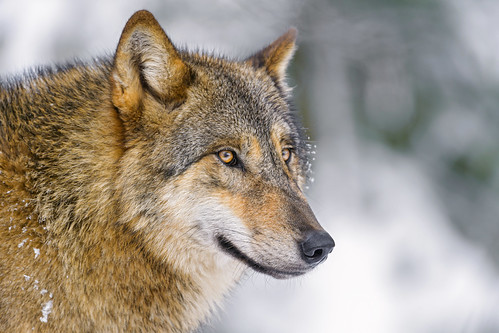 In fact wolves are gentle, shy and social animals, they live in very structured packs, and are known to actively avoid humans. During the past 100 years in North America, there have been two reported cases where healthy, wild wolves have killed people. To put this into some perspective two people are killed every year in North America from shaking vending machines resulting in them falling, despite this, we do not have a fear of vending machines.

The importance of wolves cannot be underestimated. Ecologically wolves are vital to the ecosystems they live in, they are a keystone species (a species that plays a key role in the maintaining the health of an ecosystem). As the top predator (apex predator) wolves keep the ecosystem in balance. The perfect case study for this is Yellowstone National Park. In the 1920s wolves were exterminated from the park, causing a chain of events that caused the ecosystem to collapse.

The ecosystem had been destroyed, taking the wolf out of the equation meant that the biodiversity of the park was decimated. In 1995 wolves were reintroduced to Yellowstone.  Resulting in a massive regeneration of the parks biodiversity. When the wolves were reintroduced, the elk population fell. Willows and aspen began to grow back, providing food and materials for beaver, which saw a large population increase. Beavers built dams again, stopping the flow of streams and bringing back marshy ponds, which meant the fish, amphibian and bird species returned. The dams reversed the damage done by increased water flow, and the river reverted back to its original size and course. Coyote population reduced, increasing small mammal numbers alongside birds of prey. The biodiversity was restored, all as a result of bringing the wolf back to Yellowstone. Yellowstone is not the only example, in the UK the loss of our apex predator changed the landscape. Wolves have a positive ecological impact in every place they are found globally. When an ecosystem is healthy and the wolf population is protected, species thrive as a result of the wolves.

So despite the positive effect wolves have on the ecosystem, which has a positive impact on us, we still persecute and in many places cull wolves. Wolf populations are a fraction of what they were 100 years ago, they now live in isolated pockets dotted across North America, Europe and Asia. It is about time we see wolves for what they really are, gentle and shy creatures of the forest, that we should hold in high regard for keeping the ecosystems around us in balance.

Award winning wildlife educator, wildlife blogger, vlogger & co-founder of a youth conservationist network. I am based in the East Midlands and Vancouver Island, Canada! Avid birder and conservationist who is working on research projects on cetaceans and migratory birds. I consistently write on my blog www.talkofthewild.net, add videos to https://www.youtube.com/channel/UCCa_8u9Lj13-NdPj5YNDkjA & you can also find me on Twitter or Instagram @connelbradwell!