Weird and wonderful creatures of the UK’s seas: Brittlestars

Brittlestars are closely related to the well known, star fish. Starfish, brittlestars and sea urchins all belong to the phylum Echinodermata. A phylum which is distinguished by five-fold radial symmetry and a body wall containing calcareous plates. Brittlestars then fall into the largest class within the Echinodermata: Class Ophiuroidae. 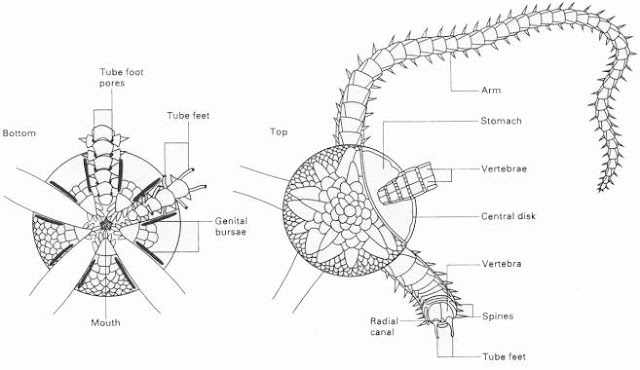 Brittlestars have five long (up to 10 cm!), thin, flexible arms located around a small, armoured central disk. Instead of using hydrostatic pressure through tube feet to move like starfish, brittlestars use their long arms to move across the seabed. The brittle stars mouths are located on the bottom of the central disc. To feed brittlestars use their long arms and the spines lining them, to catch and trap plankton and detritus out of the water column. They are also known to scavenge food on the seabed. As brittlestars do not have an anus, all waste food which is not digested is excreted back out the mouth!

About eleven species of brittlestar can commonly be found around the UK coastlines and offshore waters. They can be found in habitats ranging from under stones in rockpools to muddy sediments at 1200 m depth. A couple are described below.

A. squamata (pictured at the top of the page) is found all around the UK coastline, under stones, in rock pool seaweed and sometimes on sand in the intertidal zone. The Common brittlestar (O.fragilis) is found throughout UK waters but also wider afield, such as along the coast of Africa. O. fragilis prefers sand and shell seabed sediments and can be found in shallow water down to 350 m. The Black brittlestar (Ophiocomina nigra) can be found on the east coast of the UK down to 400 m, although it prefers shallower water. The Black brittlestar is often found alongside the common brittlestar (pictured below). Amphiura filiformis is common in  the muddy sand sediments that are found throughout the North Sea. This species burrows under the muddy sediment and then sticks its arms out to filter feed (bottom picture) and is found down to 1200 m depth.