Wandering Wallabies and other Weird Wildlife

What if I told you there were wild wallabies in England? I’d wager that most of you would think I was lying. Well, I’m not. Wallabies are just one of many species that have been released into the UK and are currently thriving in several locations across the country including Loch Lomond, Kent, Staffordshire and the Peak District. 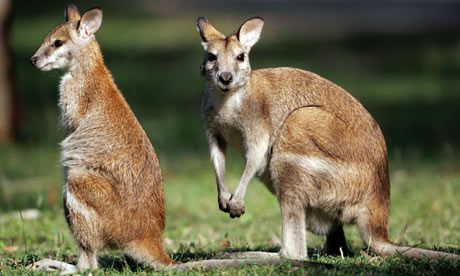 In some cases, the releases were intentional. Loch Lomond’s wallaby population were put there by a wealthy landowner who, presumably, thought they were better than sheep. In other cases such as in Staffordshire, the wallabies have escaped from zoos and private collections. What’s remarkable is that the initial releases often took place in the 1920s and 30s and yet the descendants of these founding individuals can still be seen today. No matter how they were released, the wallabies have been able to establish breeding colonies and live quite happily in the United Kingdom.

Wallabies aren’t the only non-native species that has flourished in the UK. You’ve probably heard how the grey squirrel, now known to be at least partially responsible for the demise of its red cousin, was brought here by Americans who didn’t know better. In the plant world, lots of our common garden species have been brought in from other countries and some, such as Japanese knotweed or the rhododendron, are wreaking havoc. Some alien species have been here so long that we don’t realise they aren’t native. It might surprise you to learn that fallow deer were introduced to England by the Normans! When a non-native is introduced to a new country and has a negative impact (either on humans or native species) it is known as an “invasive species”, a name that is essentially used to justify species removal programmes.

It’s important to remember that not all introduced species become invasive. Many are beneficial to the environment, and even more are completely harmless. In the majority of cases, the number of individuals that have been introduced is too low to have any real impact. This is true of the big cats that once roamed our countryside. Once again, I’m not making it up. In 1976 the Wild Animals Act came to law and people who couldn’t be bothered to apply/weren’t qualified for a licence had to give up the big cats, wolves and bears that they were keeping in circuses, zoos and as pets (you could buy such animals at Harrods, at the time). With the act in place, many people feared prosecution and decided to release their animals rather than find a suitable new home for them. Several people have admitted to releasing more than one animal in areas like the Peak District, and these were occasionally sighted for the next 15 years. In the 1980s, the prospect of seeing a jaguar in England was far more likely than you’d think.

This photo was taken earlier this year in a Devon garden. House cat, fox or something altogether more deadly? (http://www.mirror.co.uk/news/uk-news/big-cat-sightings-huge-black-5990677)

Nowadays, there are people who dedicate their lives to researching so called “cryptids”. Cryptids are animals whose existence is suspected but not proven, including everything from big cats to Bigfoot. Notably, the UK is home to the Centre for Fortean Zoology, (CFZ), an organisation dedicated to cryptozoological research that hosts a yearly conference on the subject! You may be wondering how much work there is to do. Surely the animals of the UK, a rich well studied country, have by now been documented? You’d be surprised. There are hundreds of cryptids reported and investigated every year. Most are inconclusive or sightings turn out to be other animals, but there are always exceptions. Those individuals turned loose in the 70s are by now long gone and it’s highly unlikely that they led to breeding populations, but escapes and unintentional releases occur in the modern day.

Take the beaver population currently living it up in Devon. No-one knows for sure where they came from, but they were almost certainly part of some private collection originally. Ideas of lions, tigers and bears roaming the British countryside are not as farfetched as they may seem. If someone you know tells you about an unusual wild animal they’ve seen, don’t doubt them like I’m sure some of you did when I mentioned wallabies. Remember, some sightings are less Loch Ness monster, more common-or-garden jaguar!