I am forever in awe at the power of social media and the affect that it can have on wider audiences. Today, I witnessed a real time social media campaign unfurl before me, whilst sitting at my desk, and I am glad to say that their voices were heard.

It was brought to my attention by a tweet from one of the many nature handles that I follow (if you are like me, your social media pages will be full of nature pics, obscure animals and places I’d rather be than my desk), about a local council – North Norfolk District Council, having put up a load of netting which would prevent Sand martins nesting on their cliffside. This netting was used in conjunction with a landscaping scheme which was currently being undertaken, but the material used for the netting wasn’t approved by RSPB.

Sand martins are summer tourists to parts of the UK, choosing to migrate here from Africa during the summer months to nest in large colonies. Often, they use previously dug tunnels to nest in within sand pits, riverbanks and cliffsides. By erecting this netting, the North Norfolk District Council were ignoring advice from RSPB consultants and possibly endangering the birds by using material that they could easily become tangled in. 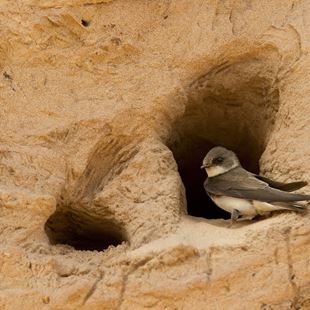 Environmentally minded individuals took to social media to tackle this issue and confront the council on their actions, and they listened. After revisiting advice and talks with RSPB the council decided to take upper parts of the netting down, hopefully encouraging sand martins to still nest in that area.

RSPB released this statement: “We haven’t finished discussions w. @NorthNorfolkDC. Whilst the full removal of the netting has not been resolved; the RSPB will be visiting #BactonCliffs to discuss our concerns regarding the remaining 1.3km length of netting & the issue of the material currently in use.”

Although this is not a full victory, it is a step forward in the right direction. Hopefully highlighting the issue that environmental impacts and disturbances to wildlife should be assessed at each stage of infrastructure to mitigate any detrimental bearing on surrounding wildlife.

Biologist living in Scotland. I work in medical sciences, looking to find out how diseases work. I also volunteer with RSPB and I am an active STEM ambassador.

Latest posts by beckys (see all)