Plastic and microplastic pollution within the natural environment is not a new phenomenon or a new research subject. However, most scientific research has focused on degradation and movement of plastic into the marine environment, and the physiological effects of microplastics. Such as, the negative impacts on species digestive systems and cause the depletion of the glycogen stored in the liver for energy.

Oona Lönnstedt and Peter Etlöv research investigated the effect of polystyrene particles about 90 micrometers in size on the juvenile stage of the European perch (Percha fluviatilis). Unhatched eggs and larvae were collected from the Baltic Sea before undergoing experiments in the lab. The juveniles were exposed to varying degrees of polystyrene microplastic; from none through to concentrations higher than currently seen within the marine environment. 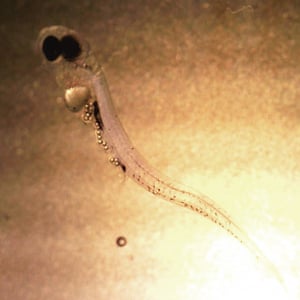 The microplastic began negatively effecting the juvenile perch even before hatching; reducing hatching success by up to 15 % compared to perch juveniles not exposed to microplastic. Once hatched, the exposed juvenile larvae preferentially ate the microplastic beads over their natural food source. The perch larvae were consequently less active and less likely to thrive. Interestingly, the exposed juveniles exhibited a reduction in response to their predators olfactory (smell) threat cues, therefore they were eaten 4x quicker than their counterparts.

Oona Lönnstedt and Peter Etlöv work demonstrates the impact of microplastics are far reaching and long-lasting. It also demonstrates how much we still have to learn about the effects of processes that are already occurring in our seas.