Modern society is growing increasingly disconnected from the natural world. That, unfortunately, is a fact. And it will come as no surprise to learn that many, particularly (but not limited to) those living in urban areas, have come to view wildlife as a hindrance in daily life or, worse still, a mere obstacle to be killed, removed or deterred at leisure. The use of terms such as pest and vermin growing in use throughout modern times as we begrudge everything from gulls and foxes to rats, rabbits and, in more exceptional cases, raptors, deer and otters for getting in the way of our cushty daily lives, our hobbies and our livelihoods.

Now, coming from an urban background and recently studying an MSc in Wildlife Management, I know wildlife can sometimes cause problems. In some cases, rather substantial ones. Pigeons and rabbits can have a significant impact on food production, certain bird species can pose a threat to human life near airports, rodents spread disease in our homes and foxes, in some locations, menace livestock farmers. This, the ever-present conflict between man and beast, is a sorry side-effect of modern life: an unavoidable symptom of our continued alteration of the landscape. And, like it or not, a measured response is sometimes required. I do not dispute this.

While I believe that, within reason, people should be allowed to take action to protect what is there’s, I also believe that such a response should be proportionate (and reasonable). And wholeheartedly believe that, wherever possible, we, as the dominant species on this green (yet greying) earth, should exercise a live and let live mentality wherever possible.  Something which is clearly not the case with the recent placement of pigeon spikes around an affluent district of Bristol.

For those that have not yet heard, the spikes to which I refer have been erected around Bartlett Court flats in Clifton, Bristol in an effort to deter pigeons from the trees outside some, particularly lavish homes. The management company responsible for their placement citing the damage caused by pigeon droppings to cars as the catalyst for action. Yes, you read that correctly, whereas most people would simply wash away the faeces, these people have opted instead to prevent birds from occupying the area in the first place. Citing a lack of washing facilities as justification for their actions.

A pilfered image of the offending spikes…

Now, pigeon droppings (or those of any other bird) on cars are something I am sure most people reading this blog will have had to deal with. They are an inconvenience, nothing more; an ever so slight nuisance that, except looking a tad untidy, does little to disrupt daily life. They do not threaten life or livelihood and, by all accounts, represent a problem easily solved with a little soap and water. Thus the addition of spikes to the trees around Clifton appears to be nothing short of overkill. The decision to degrade yet another piece of urban habitat taken based not on any tangible threat, but on the unsightly nature bird shit. Plain and simple.

If birds are not allowed in the trees, where else can they go? We already do our best to deter them from man-made contraptions, rightfully in some cases, not so much in others. Shouldn’t urban wildlife be allowed to occupy the select few areas of our towns and cities we have not yet altered beyond recognition? The trees and valuable green spaces spared the developers blades. Some, evidently, would say no, whereas reasonable individuals would say yes. It really is only fair – allowing birds to persist where they still can seems only moral.

Perhaps the uproar over these particular spikes has overdone it somewhat. Pigeons, after all, are not at immediate threat of extinction (far from it, in fact) and the addition of the ugly metal prongs to trees in Bristol is unlikely to have any significant impact upon our wildlife. Still, to me, it serves only as a startling indicator of societies growing disconnect from the world around us. A brazen reminder of the uphill battle faced by conservationists as we try to win the hearts and minds of the wider public. A battle growing more difficult by the day based on this kind of blind, unthinking ignorance. 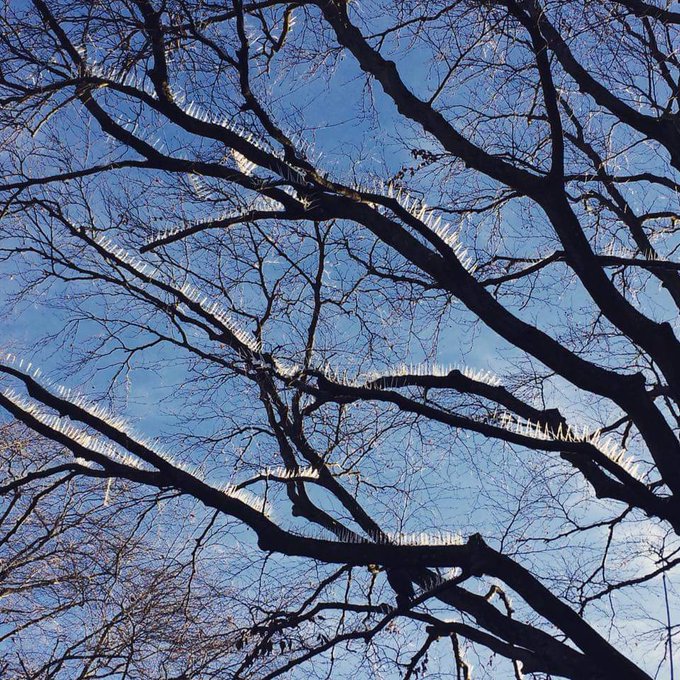 Our war on wildlife: now birds are not allowed in trees…?! Pigeon spikes spotted in Clifton, Bristol above a car park. Has anyone seen this before? How is it allowed?!

if you enjoyed this post, or any of my past blogging endeavours, please take 30-seconds of your time to vote for me in the ‘Green and Eco’ and ‘Social Influencer’ categories of the UK Blog Awards 2018. This can be done easily by following this link. I would really appreciate it!