As I walked among the statues of Blundellsands Beach, just north of Liverpool, I spotted a number of jellyfish stuck in the small pools of water. Jellyfish often go unthought-of unless seen through a pane of glass at the aquarium or while exploring the seas of more exotic lands, certainly not when thinking of the British coast. However, when Matt Slater, a marine wildlife awareness officer for Cornwall Wildlife Trust, bumped into a jelly fish in the Cornish estuary he returned with a snorkel and camera to capture footage of the rather extraordinary beast.

The video shows a barrel jellyfish, weighing up to 20kg, pulsing in the water while Matt and his dog swim while admiring it. Jellyfish are often feared with headlines coming from far off places like Australia talking of swarms of deadly jellyfish killing off swimmers. However, the barrel jellyfish, and the other 8 species found in British waters, are mostly harmless with only a few causing a nettle like sting. While many fear the harm jellyfish can cause us, like many other cases, we should be concern about how we can harm jellyfish. Being such a delicate creature, something as seemingly insignificant as a air bubble from a breaking wave can cause damage to its soft living tissue causing it to die. 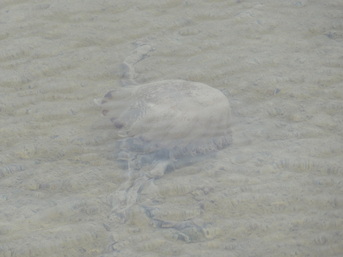 Jellyfish populations are doing rather well recently, experiencing ‘blooms’ (sudden increases in population) much greater and more frequently than ever recorded before. Already Britain has seen more jellyfish than usual with the most barrel jellyfish sighted since the summer of 2002. This is likely to be a result of the mild winter causing sea temperatures to be warmer than usual.

While it has been warned that this sudden population increase should provoke concern about implications jellyfish have on the marine ecosystem, it doesn’t come without its benefits. Jellyfish booms are often followed by an increase in other marine wildlife like the ocean sunfish and leatherback turtle. The leatherback, the largest marine turtle in the world, feeds off larger jellyfish and two have already been seen off the coast of Cornwall this summer.

While many may see the British seas as dull, grey and lifeless, it is evident that they are in fact full of life and diversity. Don’t let the warnings of the summer boom of jellyfish keep you from exploring the nations seas this summer.

To report sightings of jellyfish and other marine wildlife contact the areas local wildlife trust or the Marine Conservation Society.

For more information on jellyfish visit;