How far do red deer stags migrate to rut ?

When watching the spectacle of the wild red deer rut, have you too at times wondered just how far each of the different stags that turn up at the rutting grounds have travelled in their search for females and  to establish a harem to defend?

Outside of the mating season wild red deer stags tend to form loose bachelor groups, that may be composed of anything from two to ten or more males. Stags then live largely segregated from hinds and young from late winter onwards, in ranges that may be several miles from the traditional rutting areas they tend to return to every autumn. However the distance between the ranges used by stags in late winter and summer and the location of their rutting areas is very variable, and in truth is often unknown for most individual stags except within the confines of deer parks or the well studied red deer population on Rum (that however spans <10 miles in any direction). Only relatively few radio-tracking studies in the UK have looked into this, but some information is available from a number of stags collared as part of the Exmoor Deer Research project in the late 1990s. One of these – pictured below – I was able to track over three consecutive rutting seasons. 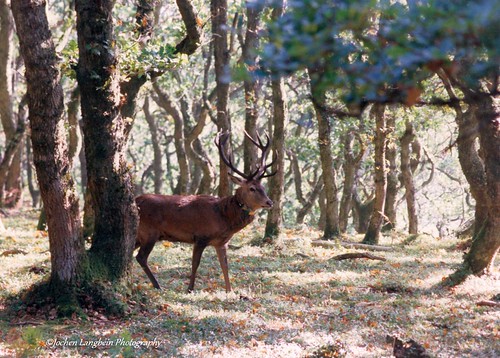 During one day in late September 1996 this large stag was found to move at least 9.6 km as the crow flies. Having recorded him early in the morning in his winter & summer range (located at the time on the eastern end of North Hill), by afternoon of the same day I spotted him back in Horner Woods nr Dunkery Beacon on Exmoor), within a few hundred yards of where we had collared him in the previous year, and returned here also the following year by which time the batteries in his collar had failed. Two other mature stags radio tracked as part of the same project in the 90’s spent their summers in different ranges in Culbone Woods and out on the moorlands of the Exmoor Forest, but well within 5 to 7 km from their respective autumn rutting areas. 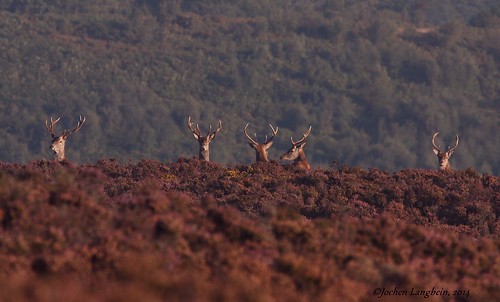 I am now once again tracking a few Exmoor stags throughout the year for a filming project (this time recognised only by their antlers and other characteristic markings rather than radio collars), but much to my surprise one 16 pointer that I have followed ever since February has moved no more than 2 to 3 miles away during the rut this year (thus far!).  If anyone else has followed individual clearly recognisable stags on Exmoor and the Quantocks in more recent years and observed them both in spring and summer in areas well away from where they later turned up for the rut, I‘d be interested to hear from you what the largest recorded distances between spring/summer and autumn ranges of red deer stags are here in the Westcountry. Or indeed also for red deer populations in other parts of the country.  [If commenting on this post please give approx. locations of deer only or else message me direct]