Finding oneself improperly dressed for the weather can have fatal consequences – just ask a white-coated weasel.

Animals that live in areas that usually have a lot of snow in the winter often change their coats to match their surroundings. Some weasels have evolved so that in the autumn they moult their brown summer coat and change to a white version. In spring they reverse the process and return to the brown version.

A new study published in Nature Scientific Reports suggests that there is a strong relationship between the quantity and duration of snow in a forest in Poland during the winter and the number of weasels wearing white the following winter. Clearly this is not a fashion decision on the part of the local weasel population.

The scientists behind the study looked at two subspecies of the rather charmingly named “least weasel”, Mustela nivalis nivalis, which does change its colour in the winter, and Mustela nivalis vulgaris, which does not. Both species live in Białowieża, an ancient relic of the vast primeval forest that once covered most of Europe, and both compete for similar resources. Yet the authors determined that when there is no snow cover the white-coated weasels were more likely to be eaten by the foxes, wolves and buzzards that see them as prey.

When there is deep snow, weasels of both colours tend to hunt underneath it, which, after all, is where the small rodents are, so the predation rates for both species are reduced. In periods of winter without snow, however, white weasels are much more conspicuous than brown ones. In recent years, because of climate change, there have been more days without snow, and the date when snow disappears in the spring has become progressively earlier.

The conclusion of the study is that the proportion of white weasels in the population is influenced by predation rates due to lack of camouflage during the previous winter.

The question for the future seems to be how long M. n. nivalis as a subspecies can survive, given the milder, largely snow-free winters that are becoming more frequent as climate change takes hold. One of the important factors in this is likely to be its ability to change the time when it moults its coat, both in the autumn and the spring. Though the weasels are already showing signs of moulting into their brown summer coats earlier in the spring, they have not yet changed the time of their autumn moult. This is thought to be because autumn temperatures have remained relatively stable while springs have been getting warmer. 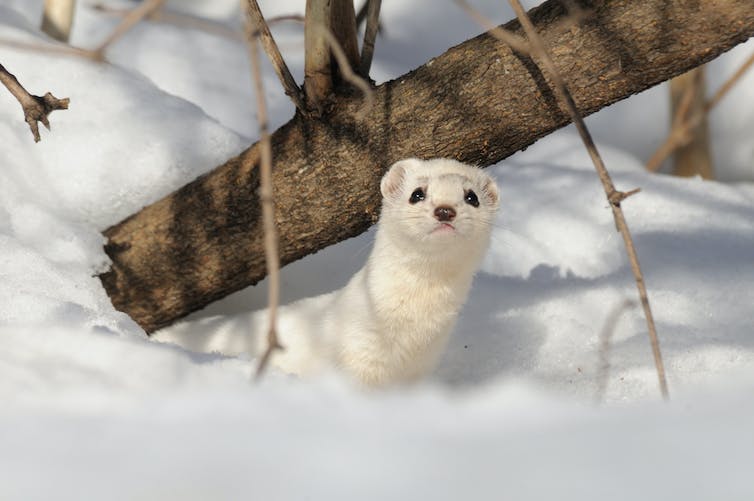 Another problem for the weasel is that, even when it can shed its winter coat earlier, that will not be helpful in the increasing periods during the winter when there is no snow. Since moulting and growing a new coat is a serious business, chopping and changing during the season is not possible. In addition to ambient temperature, moulting and therefore coat colour change is triggered by day length, the change in which affects the weasel’s hormonal state. So starting a new moult is only possible during spring and autumn when the days reach the appropriate length as well as the right temperature.

The issue of having the wrong coat for the weather is not confined to weasels. At least 22 species change their coat colour in winter including snowshoe hares, mountain hares and Arctic foxes. The various hare species face similar problems to weasels and arctic foxes, in so far as they are more vulnerable to predation when they are not camouflaged. However, as plant eaters, they don’t have to worry about also being more visible to their prey. 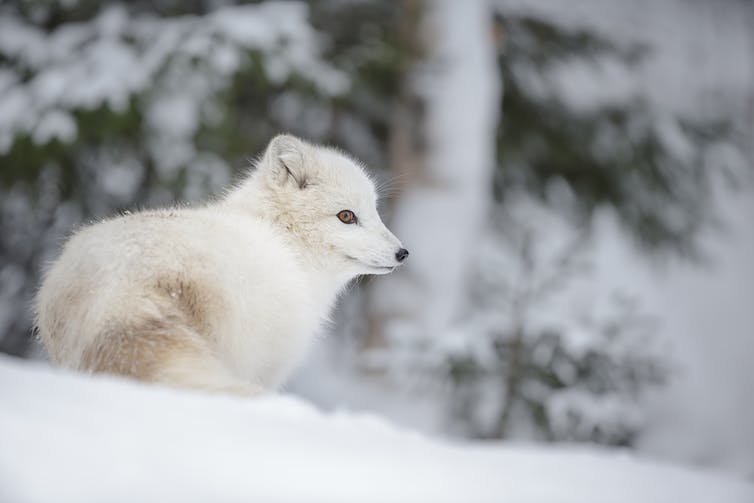 For some animals, such as the Arctic fox, the changes in the timing of seasonal events, known as phenological changes, are not the only problems brought on by climate change. Because of the warming climate and the spread of their prey species northwards, red foxes, which are larger, bolder and more robust than their Arctic cousins, have been able to extend their range northwards, too, and are now threatening to out-compete Arctic foxes.

The situation with the weasels is not quite the same, as it is greater visibility to predators that is threatening the white colour morph, rather than direct physical competition with another species. However, unpublished data from the authors of the study suggest that M. n. vulgaris (the one that stays brown) has a higher resting metabolic rate that M. n. nivalis, which means they will require more calories just to stay alive. This may just give the white form of the weasel the edge in the winter when calories are scarce, which may help to redress the balance.

If not then the potential loss of this beautiful and unique subspecies of the least weasel because of anthropogenic climate change will be one more crime to be laid at the door of humanity.