Amphibians on the EDGE

It may be no surprise to a number of regular readers of my blogs, but I tend to focus on the conservation of reptiles and amphibians. This is primarily because it’s the area of science I study and also because it’s an area that doesn’t usually get a lot of attention. We all know that pandas and rhinos are endangered but what about the small and archaic Archey’s frog (Leiopelma archeyi), endemic to New Zealand’s North Island? In terms of conservation priority, some species have been scored on their on how Evolutionary Distinct and Globally Endangered (EDGE) they are. I’m sure many of you are aware of the IUCN Red List which assesses the threats to a species, EDGE is an initiative that takes this one step further. It was started by the Zoological Society of London in the mid-2000s and has been supported by them ever since. 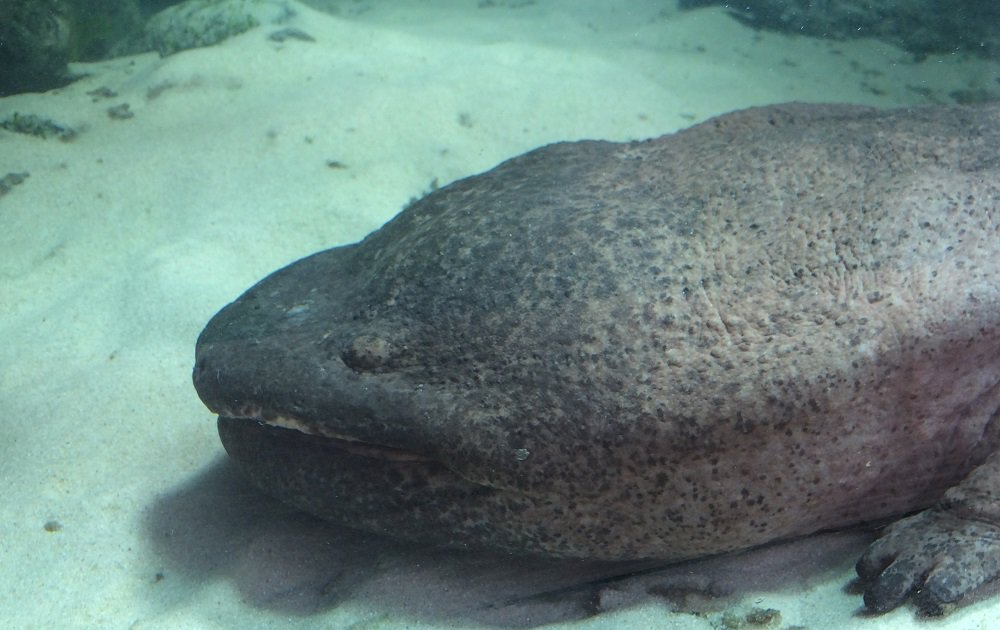 The Chinese giant salamander (Andrias davidianus) is the second most EDGE amphibian.

So far they have scored the world’s mammals, amphibians, corals and birds with the main goal of all this hard work being to ensure that appropriate research and/or conservation actions are implemented for each of these species. The EDGE of Existence program hopes to move onto sharks in the near future, following the same criteria as the other groups due to the growing threats they face. This of course raises the question, why score different species of animals on their EDGE-ness? That is very easy to answer, EDGE highlights species that represent a significant amount of evolutionary history, this often means that they have few ‘close relative’ species that can still be found in the world today. If we lose these species then whole branches of the animal kingdom and their associated evolutionary history will also be lost.

You may be asking yourself how EDGE achieves it targets and goals, the solution is something which I personally feel is something that more organisations should invest time, money and resources in. Of course some of the EDGE research and/or conservation is conducted by ZSL researchers and other collaborators but an integral part of the EDGE program is the EDGE Fellows Scheme. This scheme provides funding and support to in-country researchers/scientists to aid with field research regarding the conservation status and threats facing a particular EDGE species. The beautiful bit is that EDGE Fellows actively participate in all phases of a research project. During this they receive guidance and training in which to help them with the project and are also encouraged to conduct community outreach and educational talks/workshops. To someone who grew up in a developed nation this doesn’t sound like much but imagine you’re a passionate herpetologist in a developing country. Opportunities like these don’t grow on trees and some amazing conservation biologists from all fields of zoology have been put through their paces on the program to deliver a conservation action plan.

I personally think that this is a very important topic and if you’d like to know more then feel free to check out the Edge of Existence website here.

Chairman at Cambridgeshire and Peterborough Amphibian and Reptile Group
Steve is a current Master's student at Imperial College London and zoology graduate from Anglia Ruskin University. He has a particular passion and focus on British amphibian and reptile species. He is the current chairman of the Cambridgeshire and Peterborough Amphibian & Reptile Group (CPARG) and helps to organise and coordinate a number of amphibian and reptile surveys around the county, to map the distribution of herpetofauna within Cambridgeshire. Recently he has become interested in the amphibians of the tropics, especially South-East Asia after a trip to Borneo in 2015. Steve was an intern with the IUCN’s SSC Amphibian Red Listing Authority where he specialised in the red listing of South-East Asia’s amphibians. Steve is also a member of the SAVE THE FROGS! Task Force and a former blogger for The Wandering Herpetologist.