Think Before You Let Go: the Dangers of Releasing Balloons

I was asked by Emma Websdale, creator of “Rants for Change”, if I wanted to film a 2 minute rant on a subject I am passionate about and want to see change in. Now, there are a whole host of areas that I would very much like to see changes made in so it took me some time to decide which one to focus on but in the end, I went with helium balloon releases. You can watch the video by clicking here but there is a whole lot more I have to say on this subject, so do please read on! Unbelievably, releasing balloons is not currently classed as littering because they’re not being directly dropped on to the ground. That to me sounds like the most ridiculous piece of legislation, as if whoever passed it forgot that such a thing as gravity exists on our planet and, as the old saying goes, “what goes up must come down”. The Marine Conservation Society is one of the organisations working hard to get this changed and to ban all intentional releases of balloons and paper lanterns in the UK. I think there is a lot of ignorance surrounding this issue, particularly when it comes to the biodegradable aspect.

A quick Google search for biodegradable balloons brings up producers claiming that their latex balloons are 100% natural and will break down within six months or “as fast as an oak leaf in your back yard”. Six months is a long time and leaves a huge window of opportunity open for wildlife to consume the latex debris. Just because the balloons explode into tiny particles at a particular altitude does NOT mean they instantly become harmless to animals. Those particles, however small, have to land somewhere and wherever that is, there will be some form of living creature drawn to the colours of the pieces and tricked into consuming them.

It’s a sensitive subject when the occasion being marked with balloons or lanterns is the passing of a loved one. Understandably, families and friends want to do something special and memorable to say goodbye to the deceased but is the best way to do that really by organising a mass-littering event? When it comes down to it, that’s all a balloon release is. Just because the objects are going up instead of down doesn’t change the outcome. As I say in my video, people may as well dump a whole load of plastic on the ground and walk away because that’s where the balloon debris will end up eventually, a tempting yet deadly meal for some unsuspecting animal. I’m certain no loved on of my mine would want to be remembered in this way. 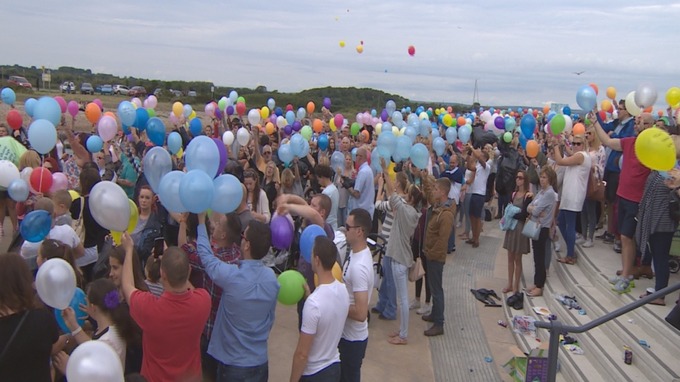 Perhaps grieving communities could be partially forgiven. However, huge corporations can in no way be pardoned. ITV’s popular talent show The X Factor is one such example of a company that should know better. To mark the first episode of this year’s series back in August, the show televised a mass-release of red balloons. I actually haven’t watched the show for a couple of years but I just happened to catch a clip of this balloon release online and thought it was a new thing they did this year. After some more searching, I came across another clip posted on YouTube which was filmed at the Birmingham auditions two years ago, suggesting that hundreds of balloons are being let loose by the X Factor team in each of the audition cities every year. That equates to thousands of balloons.

Around 7.6 million people watched the opening episode this year and a huge percentage of viewers are teenagers and young adults who follow along with the events of the show eagerly each year. In my mind, the ITV and show’s producers are are extremely irresponsible to give off the impression releasing balloons like this is acceptable. They should be showing consideration for the environment and setting an example, not completely disregarding the science that categorically states any form of litter poses an enormous risk to the natural world.

So let’s talk about what those risks actually are. As I mentioned earlier, a latex balloon takes six months to biodegrade. That gives wildlife around 180 days to eat the fragments that drop to the ground. Plenty of time to do plenty of damage. Obviously plastic and latex contain absolutely no nutritional value for animals, so the energy they expend consuming the materials is wasted. Some animals don’t even get as far as swallowing the remnants; instead, they get pieces tangled around their mouths and beaks, preventing them from eating anything at all and resulting in them starving to death, a truly horrific way to die.

The ribbons are just as bad as the balloons themselves as these can get wrapped around feet, rendering the animal helpless, and often they struggle so much to get free that the ribbon eventually cuts into their skin, giving them nasty wounds that can lead to limbs becoming partially or wholly detached.  Balloons don’t only have an effect on the terrestrial environment. Those fragments that don’t land on the ground end up in the ocean where marine mammals, such as seals and turtles, and seabirds will eat them. It is estimated that 90% of seabirds have plastic in their stomachs. That kind of statistic is sickening and shows just how much of an impact we humans have on wildlife. I am grateful that, so far, I haven’t come across any injured or dead animals during my beach clean ups. That being said, I have picked up countless pieces of balloon and ribbons from Worthing beach and I have wondered what damage the missing pieces have done elsewhere. These occurrences are 100% preventable if the people responsible for organising releases put an end to any future events. There are many other ways to mark special occasions or to show you are thinking of a loved one, without causing any damage to the natural world.

Many councils across the UK have already banned balloon and paper lantern releases on their land. However, there are still many, many more that have yet to do so. Click this link to see if your council has already banned the release of balloons and lanterns and if they haven’t, get in touch with them, via Twitter, Facebook or email, to ask them why and persuade them to reconsider. My council isn’t on there, so I intend to get in touch and voice my opinion. I hope you will do the same.