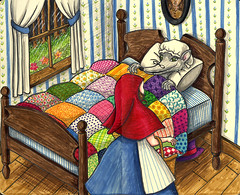 Wolves have always been considered ‘villains or monsters’. Take fairytales for instance, Little Red Riding Hood and the Three Little Pigs both portray the wolf as the main antagonist. Urban legends and myths regarding Werewolves have shown the wolf as some sort of monster, however wolf attacks on humans are very rare… Experts say that the likelihood that wolves would attack people is simply far-fetched, an article on News Discovery (2015) states that a person is more likely to be killed by lightening, ATVs, dogs, cows and even elevators than by a wolf.

Once the world’s most widely distributed mammal, the grey wolf has become extinct across much of its former range and its present distribution is much restricted, WWF.

The main threat to wolves is mankind, which nowadays will be because of conflict to livestock losses. If a wolf is even suspected of being the cause for livestock losses they are often killed and sometimes the entire wolf pack can become victim to this as well. Other threats that man pose to wolves is lack of knowledge (think fairytale ‘BIG BAD’ wolf), habitat loss, hunting for fur and lack of protection. Wolves are now virtually exterminated in continental United States and Western Europe.

Wolves actually play an important part in keeping their ecosystems healthy, they keep the population of deers and elk in check which benefits many other animal and plant species. This has been proved by the reintroduction of Wolves in Yellowstone National Park in 1995. It was shown that the presence of wolves influenced the population and behaviour of their prey. The prey animals changed their browsing and foraging patterns which had an effect on how they moved about the land, often altering the landscape itself. It has also been documented that the carcasses of their prey can provide food for other wildlife species such as bears. For all of these reasons Wolves are vital in maintaining the health and structure and balance of ecosystems Why Wolves Matter.