Last weekend I returned from a two-week trip to India. I went with family to visit my aunt and uncle who are currently living in Delhi, where we spent most of our time. What a crazy city! It was an intense holiday and fantastic for wildlife, particularly birds, but there is one huge highlight that I have to talk about now, while it is still relatively fresh in my mind.

We took a four-day trip down to Madhya Pradesh, located more or less smack-bang in the middle of India. After an hour’s flight to Nagpur airport and five hours of driving through rural villages on roads that make our potholes here look quite tame, we arrived at Kipling Camp, on the outskirts of Kanha National Park. Having come from the extreme hustle, bustle and noise of Delhi, I was struck by the contrast the camp made, where the only noise was that of the common hawk cuckoo, locally known as the ‘brainfever bird’ for its repetitive three-note call. This was a sound I came to be very familiar with over the next four days.

Kanha National Park is one of 27 tiger reserves in India and known to be one of the best places to see Bengal tigers in the wild. It is just shy of 2000-sq-km and plays host to a huge number of species of flora and fauna but it is the tigers that draw people from all over the globe, with an estimated number of 89 currently living on the reserve. In the 1970s, with the the extinction of tigers a very real threat after decades of relentless poaching, Project Tiger was launched and Kanha was one of the first areas to come under the project’s protection. Today, populations of Bengal tigers in India have recovered to an extent, with over 2500 animals in the wild, but poaching is still an ever-present and concerning threat.

We had three morning safaris booked during our stay at Kipling. Now, there’s not much that will get me out of bed at 4am over three consecutive days, but the prospect of heading out in a jeep in pursuit of birds and mammals I’d never seen before was definitely enough to do the trick. I was careful not to get my hopes up over the prospect of glimpsing a wild tiger because I knew the stats and they weren’t really in our favour. As I discovered on our first two safaris, there were plenty of other species to keep me interested. And the birds! I have so much to say about the birds but that’s for another post. 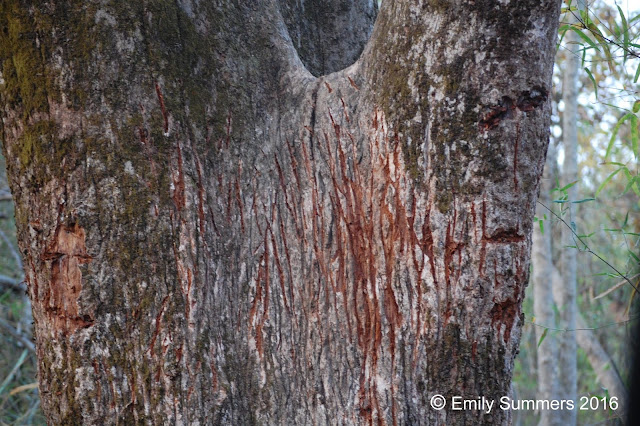 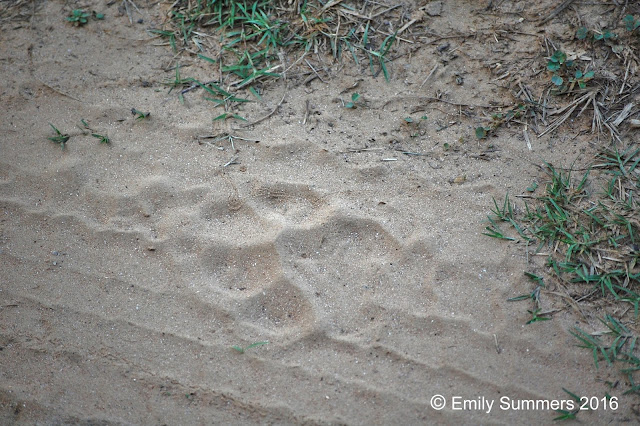 So our first two trips out yielded no tigers. That wasn’t for want of trying by our guides who were constantly scanning the trees and listening for alarm calls. They did show us proof that the tigers were out there though, in the form of deep scratches 10ft up a tree trunk and pug marks on the sandy road. However, by the end of day two, as we nursed cups of Masala Chai and chatted about what we’d seen and heard, all five us were resigned to the fact that a real-life tiger sighting was probably not on the cards.

Day three. We were once again being driven by Rahim, who was the most fantastic guide and absolute expert on birds. He had already taken us out the day before on both our morning safari and for an evening bird drive. I was in awe of Rahim, who seemed to know everything there was to know about Indian birds and could even imitate each species’ call. As we queued with the other jeeps at the park gates, waiting for them to open at 6:15am, there was a tangible sense of anticipation in our group. We all knew that today was our last chance.

We set off with Rahim and another guide from the park and, as had happened every morning, jeeps began peeling off from the main track, heading off to different zones of the reserve. We had visited two different zones already; today we were heading for Kisli. On our first two safaris, we stopped frequently to look at and photograph various different species of deer and birds. This time, we barely stopped at all, and when we did, it was because Rahim slammed on the brakes to scan the surrounding area. I had no idea what he was looking at but that goes to show how well he knew the park. Every time we stopped and sat in silence, staring into the undergrowth, my excitement grew.

Rahim and our park guide were determined, there was no getting away from that. They were seeing things that we simply weren’t. When we stopped, Rahim would climb on top of the jeep, each leg balanced on the roof bars, and scan the horizon with my binoculars. The two guides spoke to each other in Hindi and although none of us spoke the language, we could tell by the tone of their voices that something was definitely happening. Several times we stopped to look at fresh pug marks and at one point we came across droppings. After a while, I started recognising certain parts of the track and came to the realisation that we were looping round and round the same section of forest. Our tiger was somewhere among those trees.

Another stop. More listening and scanning. More talk in Hindi. My heart was beating hard against my chest. Suddenly, Rahim thrust my bins back at me and dropped heavily into the jeep, slamming a foot on the accelerator. We were hurtling down the trail and adrenaline flooded my body as I held on. Another stop. More Hindi. A strange noise echoed from up ahead and Rahim told us that it was the alarm call of a barking deer. Even I know that alarm calls are a good sign when tracking tigers. We followed the trail in the direction of the call and as we rounded a corner, we saw three other jeeps parked and everyone inside them standing up, cameras and bins all pointing to the right.

“Tiger, tiger!” whispered Rahim, gesturing at us to stand on our seats. I focused on the bamboo patch he was pointing at and gasped. That flash of movement in between the grass was unmistakably a tiger. Despite those camouflaging black stripes doing their job, I could clearly see the sinewy movement of an orange body passing through. “Have camera ready,” Rahim told me. I waited, holding my breath, for her to come out into the open. And she did. 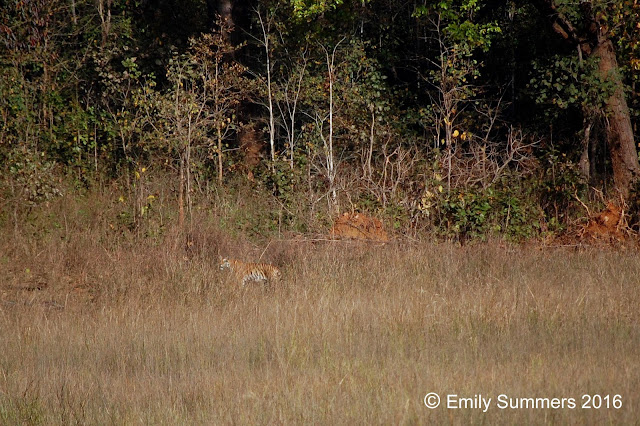 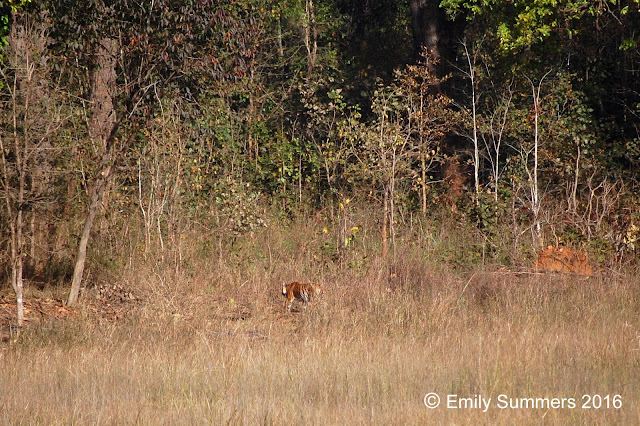 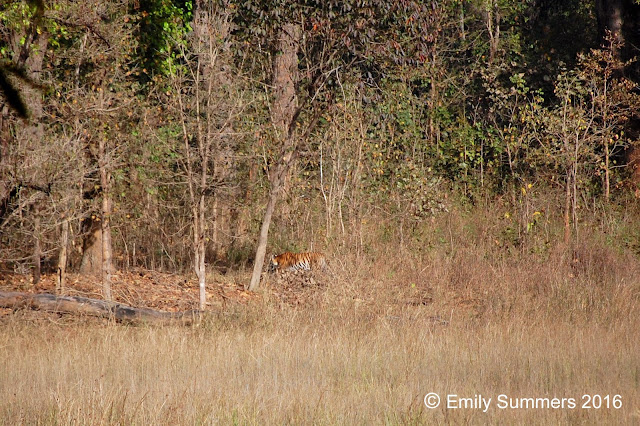 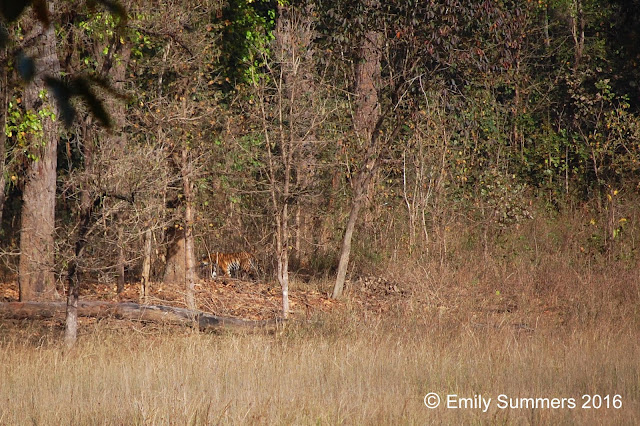 There wasn’t a sound from anyone as we all watched this stunning animal amble slowly across the open grass. The sun highlighted her white underparts and the spots behind her ears. I was ecstatic when I looked at my photos later to see I’d caught her face as well; you can even see her panting. Once she’d disappeared into the thicker trees, we looked around at one another and all had the same huge grins plastered across our faces. My heart was still hammering from the pursuit.

Having seen what they’d come for, the other jeeps turned around and headed back from where we had come. Our guides decided to carry on forward as they thought they knew roughly where the tiger might emerge from the trees. At the right spot, we sat and waited with only the call of the brainfever bird breaking the silence. About 15 minutes passed then a harsh, throaty call echoed from the forest. “Langur alarm call” Rahim told us. Another good sign from the monkeys. A few more moments then my stepdad, Kevin, whispered “here she comes!” We were afforded a second glimpse of our tiger as she strolled down the valley and at one point, it looked as if she might come out on to the road directly in front of us. Sadly, she chose a different route, and with one last push through the vegetation, I watched those stripes merge with the bamboo and vanish.

That was, hands-down, the best wildlife encounter of my life. You simply don’t get to see an animal like that in the wild everyday. The whole experience of tracking her was one of the most thrilling things I’ve ever been through and I truly couldn’t stop the feeling of pure excitement rushing through me. I count myself extremely lucky to have had such a fantastic sighting because many visitors to the park only have the briefest of glimpses, or don’t have any at all. The very fact that she wasn’t in a zoo or put there intentionally, she was just in the wild, wandering freely, that’s what made it so special. Knowing that she was doing what tigers do naturally and I was witnessing nature at it’s finest, well; there’s no beating that.