In my article last week I looked at where and when you can see marine mammals around the UK. One of the easiest species to spot are grey and common seals due to the large UK populations and their distribution throughout UK coastal waters. I live close to Blakeney Harbour in Norfolk, where there are resident populations of both species. If you are lucky enough to visit Blakeney or one of the other sites in the UK where both species can be found (such as the Orkney Islands or the Thames estuary), it would be useful to know how to tell the difference between the two species. Several features can be used to distinguish between the two species including face shape, size, how they sit on the beach and at what time of the year they produce pups.

FACE SHAPE
Probably the simplest way to distinguish between the two species when one appears close to you in the water. The common or harbour seal has a ‘dog-like’ face. Their head is round with large eyes position towards the front of their face and their forehead rising steeper than their nose creating a dog-like snout. Whereas grey seals are often described as having a more ‘cat-like’ face. They have a more oval-shaped head, with their eyes set in the middle and lack the dip between the forehead and nose that creates the ‘dog-like’ snout in common seals. Grey seals also often appear to have multiple chins!

SIZE
Common seals reach 1.35-1.45 m in length (female and male length respectively) compared to grey seals that reaches 1.80 m. Although there is the size difference it is not massive and isn’t much use if you just spot one seal in the water, it’s easiest to study the face shape.

BEHAVIOUR OUTSIDE OF THE WATER
Both species of seal can adopt the head-up and tail-up position when on land but common seals tend to this much more than grey seals. When hauled out onto beaches, common seals also prefer having some individual space and can be found more spread out than grey seals.

BREEDING AND MOULTING CYCLES
The time of year you spot seals hauled out on the beaches with pups or moulting around the UK can also be a good indicator of the species. Common seals tend to pup in June and July. Pups are born below the high tide level and are able to swim with their mother with the next incoming tide. Common seal pups are able to do this as they have already moulted the distinctive white pup fur in their mothers uterus. Grey seals pup between September and December and the pups have white fur and are unable to enter the water until they have moulted this fur. Adult moulting occurs between July and September for common seals and December to April for grey seals.

I hope the information above helps all keen seal spotters to identify between the two species. Good luck! 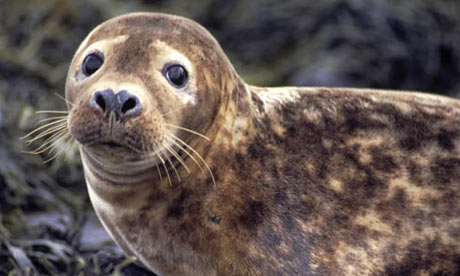