Innovative ideas to tackle a throw away society

Over the last year or so, I have read about some brilliant ideas and inventions that tackle some of the great environmental issues of our time. Rubbish is a huge problem, the UK alone produces 100 million tonnes of rubbish every year. But this global issue leads to ideas about producing water bottles made from algae and paper cups with trees in. Our land and oceans are filled with our rubbish, so people invent new ways to clean the environment. Many of these inventions are still in the very early stages of development. But with investment, public interest and support some of these inventions may change the way we live and define a sustainable and environmentally friendly society. This is by no means an exhaustive list but one of some inventions that have caught my eye and made me wish I had thought of that!

Plastic can take up to 500 years to bio-degrade. In America alone, 25,000,000 plastic water bottles are thrown away every hour (recyclingbins.co.uk), at-least half of these will not have been used more than once. Icelandic product design student Ari Jónsson, decided to tackle this issue head on after reading about the huge amount of plastic waste we generate every day. ” Why are we using materials that take hundreds of years to break down in nature to drink from once and throw away”.  Having tried a range of materials, he came across powdered agar made from algae. Water and agar forms a jelly-like substance. The water and agar were slowly heated before being poured onto a freezer-cold bottle shaped mould. The mould was then rotated whilst submerged in a ice-cold bucket of water until the liquid inside took the shape of the mould. As long as the bottle is filled with water, it will maintain it’s shape. As soon as the bottle is empty it will begin to bio-degrade. When the bottle is filled with water, the bottle appears clear and only takes on a slightly ‘dirty’ colour when it is empty and beginning to bio-degrade (dezeen.com). 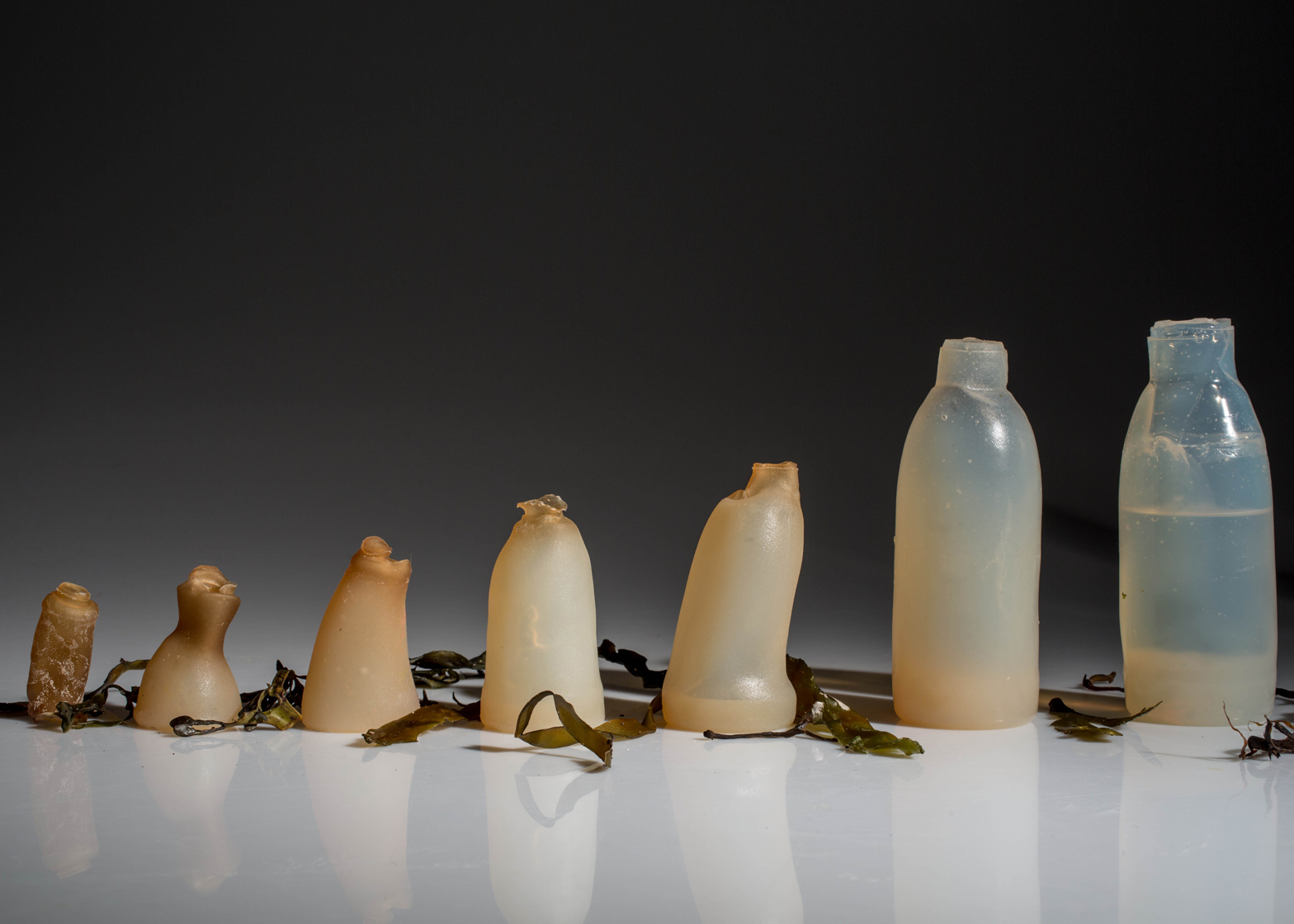 Engineers at the University of Engineering and Technology in Peru have created two brilliant ways to make billboards do more than advertise. They have invented billboards that create drinkable water and that clean the air of pollutants. The drinkable water billboard came first following a collaboration of the university and the advertising agency MayoDraftFCB. Availability of running water is a problem in Lima,where the annual rainfall is less than 2.5 cm, and many of the residents have to draw water from wells that can often become polluted. However, Lima’s humidity is about 98 % and it was this that allowed the engineers to create water from air. A reverse osmosis system within the billboard captures the humid air, condenses and purifies it and then deposits in to 20 litre tanks. In 3 months, just one billboard created 9450 litres of clean drinking water for local residence!

Just one air-purifying billboard can  do the work of 1,200 trees, purifying 10,000 cubic meters of polluted air in crowded cities. The billboard combines the polluted air with water, where thermodynamics actively dissolve the pollutants into the water and release fresh air. The purifying process is continuous, using 100 % recyclable water and consumes little energy. In March over one week, the billboard filtered 500,000 cubic meters of air, removing 99 % of airborne bacteria. That is clean air for the residence of 5 blocks. But Lima is not the only city to suffer from poor air quality, London breached its own legal limit on air pollution for the year by the 7th January, 2016. This billboard does not rely on Lima’s spercific climate and could be used all over the world to improve air quality for residence of any big city (gizmag.com; bigthink.com).

Fifty eight billion paper cups are thrown away every year after we have enjoyed our teas, coffee or hot chocolate. But with such a huge problem comes some brilliant ideas to tackle the issue have appeared over the last 5 years. From reducing peoples reliance and/or preference on using paper cups when buying coffee to producing a sustainable, biodegradable cup. One idea is to place native seeds into the walls of the cup that bio-degrades in 180 days. Every cup has then got the potential to become a plant. Another idea is creating cups that bio-degrade quicker than average paper cup or that can be fully recycled.Most paper cups often have a plastic or wax film covering to prevent liquid leakage but make recycling hard and increasing the time taken to bio-degrade. New materials and ideas include rice husks which remain after processing rice for human consumption, palm fronds and a cup made of fully recycled paper that in turn can be fully recycled again (betacup.jovota.com; viralnova.com).

Cleaning Up Our Oceans

A lot of the rubbish we throw away ends up in the environment. The sea is more of a challenge to clean up than the land for obvious reasons. But a couple of inventions have appeared in recent years that hope to solve this issue. Th Seabin is designed to work in ports and marinas where a lot of the rubbish enters the sea. Invented by two Australian surfers who were fed up with surfing surrounded by plastic. The Seabin is installed in a dock and plumbed into a shore-based water pump. The rim of the bin sits even with the surface of the water. The pump sucks water into the bin along with any rubbish and oil on the waters surface. The rubbish is collected in a removable bag made of natural fibre whilst the water is pumped through a oil-water separator, before being fed back into the ocean after being cleaned (gizmag.com).

A larger scale idea is seen with The Ocean Cleanup project, which aims to help clean millions of square kilometers of ocean. A lot of the rubbish that ends up in our oceans, ends up concentrating in the five ocean gyres. By modelling the currents driving the gyres, The Ocean Cleanup team have been able to model where large barriers would be best placed. These barriers are arranged in a V-shaped array that is attached to the seabed. Plastic within the gyres naturally collects against the barriers as it moves with the current. Underneath the barriers are non-permeable suspended barriers, that will help collect plastic that is under the surface. The current and marine animals will be able to pass under this barrier and prevent any by-catch. As the barriers are set in a V-shape, the plastic will move towards the central point, where an anchored platform, will store the concentrated plastic until it is removed to land for recycling (theoceancleanup.com).