Global Cooling: A driver of diversification?

Compelling new research suggests that global warming does not affect all animal speciation in the same way.

Numerous studies have linked rising temperature, associated with global warming, with a reduced rate of speciation and diversification. However a study published in Nature Communications on October 4th suggests that some genetic clades, not previously studied in this context, diversify more rapidly in warmer conditions.

The research focused on a group of aquatic crustaceans, renowned for their diversity, the Anomura. This species groups contains crustaceans such as hermit crabs, king crabs, porcelain crabs, mole crabs and squat lobsters. Whilst their findings for members of the marine clade continued to confirm theories that speciation is slowed in a warmer climate, their study of a single freshwater clade showed the opposite: Speciation was more rapid in warmer temperatures.

To study this, the researchers built a phylogenetic supertree using 60 genetic trees and results from papers published between 1986 and 2011. Diversification analysis was completed using global oxygen 18/oxygen 16 ratio curve where ratios were used as a proxy for evaluating paleo-temperatures.

How was the ratio used as a proxi? :  Two isotopes of oxygen, oxygen 18 and oxygen 16, are naturally present in ocean water. The two isotopes are a different atomic weight, with O18 being heavier: O18 has 8 protons and 10 neutrons, O16 has 8 neutrons and 8 protons.

Their ratio varies over time and mirrors geological climates changes with O16 evaporating faster than O18 and O18 being released by rain-full first due to its heavier weight. Warmer temperatures cause O16 to evaporate from the ocean, leaving a O18 enriched medium.

These ratios get captured in forming ice or calcite and are preserved over time. Analysis of drilled ice or calcite cores allow scientists to look establish prior ratios and thus prior climates.

More O18 than O16 is indicative of a colder atmosphere.

More O16 than O18 is indicative of a warmer atmosphere. 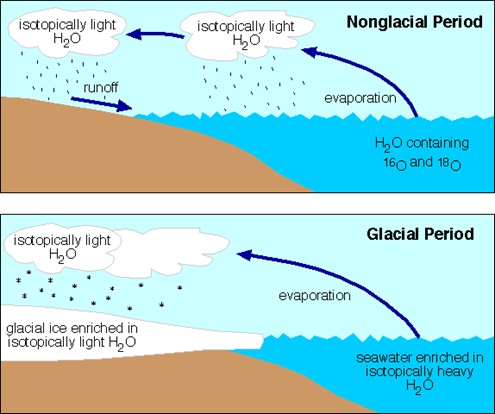 Anomura, as an overall group, had speciation rates that were negatively associated with warmer temperatures ie. climate change induced temperature increases would cause a reduction in speciation.

Whilst marine clades continued to be negatively associated with warmer temperatures, freshwater clade speciation was positively associated with cooler temperatures ie. speciation increased with warmer temperatures.
Conclusions suggests that on an “infra-ordinal level, Anomura demonstrate increased speciation with cooler temperatures”. However the exception to this observation are the freshwater aeglids in which the pattern is reversed. These findings will open new debate regarding the effects of global climate change on animal speciation. It also suggests that performing a more in-depth secondary analysis of previous studies could reveal additional similar findings.

Climate change has a profound effect on marine species. Temperature changes causes many changes to bodies of water such as changes to ocean currents, shallow ocean-shelf habitats and shorelines. Fresh bodies of water are less susceptible to such changes. It is thought that it is for this reason that this positive correlation was observed with freshwater aeglids.

The authors of the study, from Bath and York Universities, underline the importance of protecting crustaceous species due to their importance in both food trade and biological ecosystems as well as their fragility in the face of climate change.

Lillian is a student currently studying biology and media communications. She is hoping to follow a post graduate degree in scientific journalism.