Could Tasmanian Devils Be Evolving To Resist Cancer?

80% of the Tasmanian Devil population has been wiped out in just a few decades due to a fatal facial tumour disease, affecting nearly all Tasmanian Devil populations. However, after such a dark period for this species, there is a beacon of hope. A new study published in the Nature Communications Journal has found that the species seems to have evolved a resistance to the cancer that was widely expected to cause its extinction. 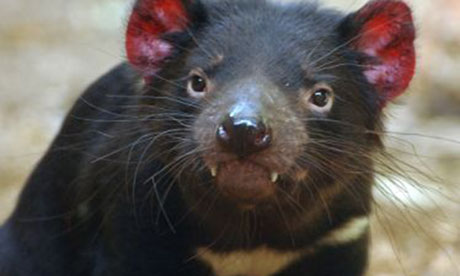 Devil Facial Tumour Disease (DFTD) was first detected in 1996 and since then has spread across 95% of Tasmania, killing nearly every animal it infects. DFTD is one of only three transmissible cancers, spread from devil to devil when they aggressively bite each other on the snout. The other two transmissible cancers that are currently known about include the centuries old Canine Transmissible Venereal Disease and a new cancer discovered in US clams in 2015.

The study analysed 10,000 Tasmanian devil tissue samples that had been collected, using them to compare DNA of devil populations before, during and after the arrival of the disease. DNA of 300 individuals from 3 separate populations were examined and researchers found 5 genes in 2 sections of the genome related to cancer and immune function that were changing faster than the rest of the genome and were found more in populations of devils that had outlived the point where scientists thought they would become extinct. It is unlikely that such a fast genetic evolution could offer a complete resistance against DFTD, as devil numbers aren’t recovering, but it could be delaying fatalities long enough for sexually mature individuals to reproduce, which would explain how some populations have exceeded scientists’ survival expectations.

The devastation caused by this disease has affected the balance of Tasmania’s ecosystem, as a lack of devils has allowed for the exponential increase of invasive species such as feral cats, which once would have been kept at bay by the devil, due to its apex predator status. This in turn has had negative implications for native species like the quoll. If the devils are indeed developing a resistance to this disease, there could be hope for not just them, but also the rest of Tasmania’s natives.

There is hope yet that the Tasmanian devil will overcome this horrific disease and thrive once more.